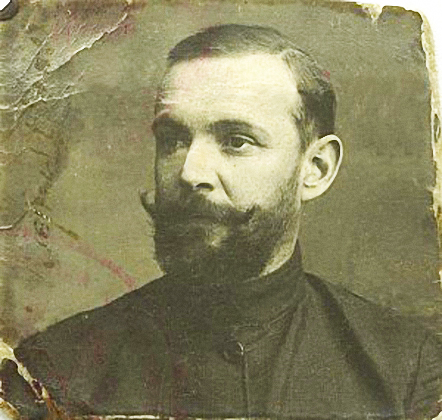 Vsevolod Zmiyenko was born in Odesa. There he got a special education at the Infantry Cadet School. First he served in Ochakiv, then in the 11th Infantry Regiment in Zhytomyr. In 1913 he graduated from the Imperial Nicholas Military Academy in St. Petersburg. After that he served in the 59th Lublin Infantry Regiment in Odesa. With his regiment, he went to the fronts of the First World War. According to eyewitnesses, he was extremely brave and courageous in battle, was not afraid to take responsibility, was one of the first to attack.

In 1917 he was promoted to the rank of Lieutenant Colonel. In Odesa, the 33-year-old officer immediately immersed himself in the atmosphere of the Ukrainian revolution. He joined the formation of the Odesa Haydamaky Division of the Central Rada troops. He soon became Chief of Staff of the Division. In March 1918 he was appointed the Military Comissar of Odesa. And a few weeks later, the Central Rada assigned him the duties of the Head of the Demobilization Commission of the Ukrainian People's Republic in Tavria, Kherson and Katerynoslav regions. He was engaged in the registration, deployment, demobilization and conscription of Ukrainian soldiers and officers who were arriving from the fronts of the First World War.

In early 1920, Vsevolod Zmiyenko headed the Staff of the 6th Sich Rifle Division. The Division was destined to go down in history thanks to the skillful actions of its commanders. When in the summer of 1920 Semyon Budyonny's First Bolshevik Cavalry Army was sent to help Mikhail Tukhachevsky's troops advancing on Warsaw, the 6th Sich Rifle Division became an obstacle to them in the Zamostya area. In fact, the battle of Zamostya became decisive in deterring the Red Cavalry's attack on Warsaw. For the successful combat actions, Zmiyenko was soon promoted to the rank of Khorunzhyi General of the Army of the Ukrainian People's Republic.

From December 1920, Zmiyenko, along with other military servicemen of the UPR Army, was in internment camps in Poland. Soon the leaders of the UPR emigration, intending to return to their homeland to restore an independent Ukrainian state, intensified their activity. They created the General Staff of the Military Ministry of the UPR government in exile, divided into three sections according to the spheres of work. Its second section, in particular, was to organize intelligence and counterintelligence.

In 1928, Vsevolod Zmiyenko was appointed Chief of the Second Section of the General Staff. The choice was not accidental. Zmiyenko had considerable experience in organizational work, in the period of the Directory of the Ukrainian People's Republic he worked at the General Staff, where he was directly involved in the intelligence activity.

Under his leadership, an extensive network of intelligence officers, residents and couriers was created, instructions for conducting intelligence work, secrecy rules, methods of training personnel for this activity were developed, and active propaganda was conducted. In addition, intelligence points were set up in European countries that shared a border with the USSR –Romania, Czechoslovakia, Turkey, Bulgaria, as well as in Persia and even the Far East.

Vsevolod Zmiyenko headed the Intelligence Service of the State Center of the Ukrainian People's Republic until its cessation in 1936. After that he was engaged in the work of the UPR's government. He entered the history of prominent figures of emigration as a deeply decent man, a strong-willed personality, capable of making decisions independently, and a born leader. He brought his whole self to work, neglecting his personal time and health, which eventually led to a serious illness. He died in Warsaw on October 30, 1938.

To honour Vsevolod Zmiyenko's memory, in 2018, the Kyiv City Council decided to give his name to one of the streets in Podilskyi district.