January 24 in the History of the Ukrainian Foreign Intelligence 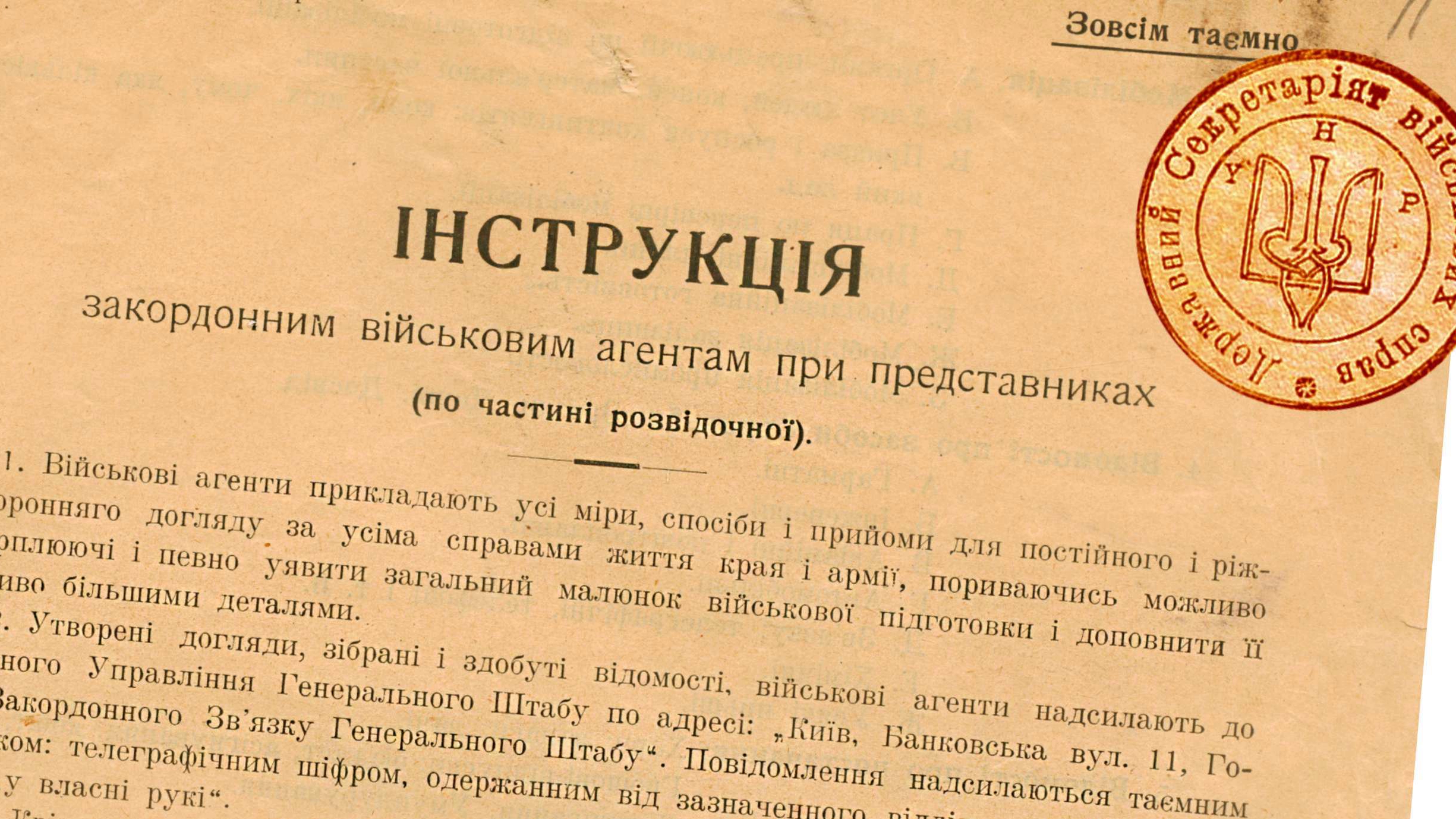 The date is decisive for the history of the FISU

Referring to archives proves that the choice of this date was not accidental. The Central State Archive of Public Associations of Ukraine has documents confirming that on January 24, 1919, a temporary structure of the Political Department of the Ministry of Internal Affairs of the Directory of the Ukrainian People’s Republic, which included the Foreign Information Department, was approved. In accordance with the tasks set, it was intended to conduct intelligence against enemies of the UPR (staffs of the Red and Volunteer Armies), as well as against countries – potential adversaries of the Republic and possible allies. That is, it was on this day that the first unit of the national foreign intelligence was created.

But gradually the military intelligence and military attaches began to be entrusted with the functions of national political intelligence: obtaining, collecting and studying information about the political situation in the countries of interest, their military and economic potential, creating positions of influence to find allies in the matter of recognizing and guaranteeing the sovereignty of the Ukrainian state. Eventually, the Foreign Information Department was established, which took over all these functions.

The intelligence unit used classic methods and tools typical for the secret services of the time, the main of which were secret agents and their infiltration and use.

Of particular interest are the “Rules for Enlisting Employees to Political Information Departments” developed by the Political Department. They state that the citizen had to submit a written request and fill out a special questionnaire, in which, among the general information, he had to write which service he had held before 1917, what he had been doing since March 1917, what foreign languages he spoke and what his level of the Ukrainian language was. Besides, candidates were required to have recommendations from Ukrainian parties or at least from two of their members, as well as written evidence about the candidate's non-involvement in Bolshevik, Russophile, and other movements hostile to the UPR.

Persons who had worked in political investigation services of Bolsheviks or other occupiers of Ukraine were not allowed to work at the Department. All the submitted information was carefully checked. Those caught in a deception would be punished by one- to- five months' administrative arrest or prosecuted if the Department learnt about their attempts to intentionally infiltrate into the Ukrainian Intelligence for hostile purposes.

After enlistment, all employees took special oath to perform their duties honestly and conscientiously in the interests of the Ukrainian state. For high-quality recruitment to political information departments and acquisition of valuable agents, heads of departments, their assistants and employees were provided with payments from the secret rewarding fund for professional work – monthly allowances of up to 25 percent of the established salary. 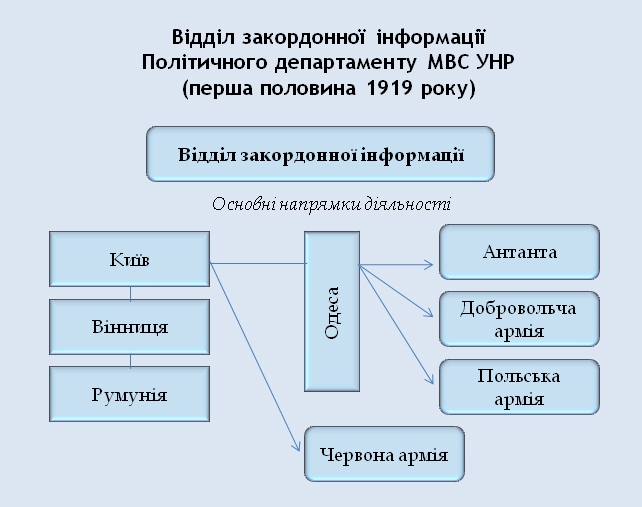 To obtain the necessary information, the Department actively used the abilities of diplomatic missions and other institutions of the UPR abroad, as well as the Ukrainian diaspora and foreign socio-political circles, which sympathized with Ukraine's struggle for independence and often helped with practical steps.

So far there is no information on the special training of the employees newly enrolled into the Department. It is only mentioned that “training was carried out through daily individual and course training in practical units”. At the same time, archives contain materials on the training during that period of qualified intelligence and counterintelligence personnel of the Intelligence Directorate of the General Staff of the Armed Forces of the Ukrainian People's Republic.

For this purpose there was a special “School of Intelligence Education”. The school authorities included the Head Master (subject personally to the Minister of War), his Assistant and a clerk. The Head Master of the School was a military or civilian, well acquainted with the work of special services. Teachers could be military or civilians depending on the need. The School had to train specialists capable of organizing intelligence and counterintelligence centers in the enemy's rear in the occupied territories, as well as providing information to the Center. The term of study was 1 year. During that time, the cadets had to acquire both general and special knowledge in order to further perform intelligence and counterintelligence tasks, subversive actions, and fight economic crimes.

A regulatory framework had already been created, which in general terms determined the main tasks, directions, peculiarities of intelligence activities, in particular, “Instructions for Military Intelligence Agents at Representatives Abroad (in regards to intelligence)”, “Instructions for Military Agents and Persons Representing Them”, “Instruction for the State Information Bureau” and other documents on the organization of daily work abroad. These instructions were carefully studied by the cadets of the School, but first of all they were taught practical skills.

This special educational institution enlisted officers and servicemen aged 18 to 30 who had the appropriate level of education, as well as volunteers from among civilian young people. Women aged 18 to 25 could also become cadets. After leaving the School, its graduates would serve in intelligence and counterintelligence units for at least three years and were to be used as agents on the most critical directions of work. Many of them had the status of unofficial secret employees. The plans were to train agents of various specialties, including resident agents for intelligence and counterintelligence, couriers agents, contact agents, etc.

Of course, in that period of large-scale hostilities, evacuation of the government from one city to another, lack of qualified personnel and sufficient funds to finance the planned activities, it was very difficult to organize the full functioning of the Ukrainian Foreign Intelligence, let alone long-term training at special intelligence schools.

At the same time, the activity of the Foreign Information Department is evidenced by repeated mentions of it in the documents of the All-Russian Extraordinary Commission (VChK). From February 1919 the Department was located in Vinnytsya. Within a short period of time, its staff managed to establish an intelligence network in Odesa (the sphere of activity of the Entente, the Volunteer and Polish armies), Kyiv (Red Army), Kharkiv (in relation to special departments and military formations of the Ukrainian Soviet government) and Romania. Besides, due to the operational capabilities of the Department, the Head of the Directory Simon Petliura studied the attitude of governments, political and business circles of a number of Western countries to the problems of Ukraine and implemented plans for relevant influence on them and possible use.

And this is an absolutely different story, which has nothing to do with the history of the Foreign Department of the VChK-GPU-NKVD of Soviet times, which dates back to December 20, 1920 and is still celebrated in Russia as a professional holiday of the Russian foreign intelligence.