General Oleksandr Udovychenko. Representative of the UPR Intelligence in France 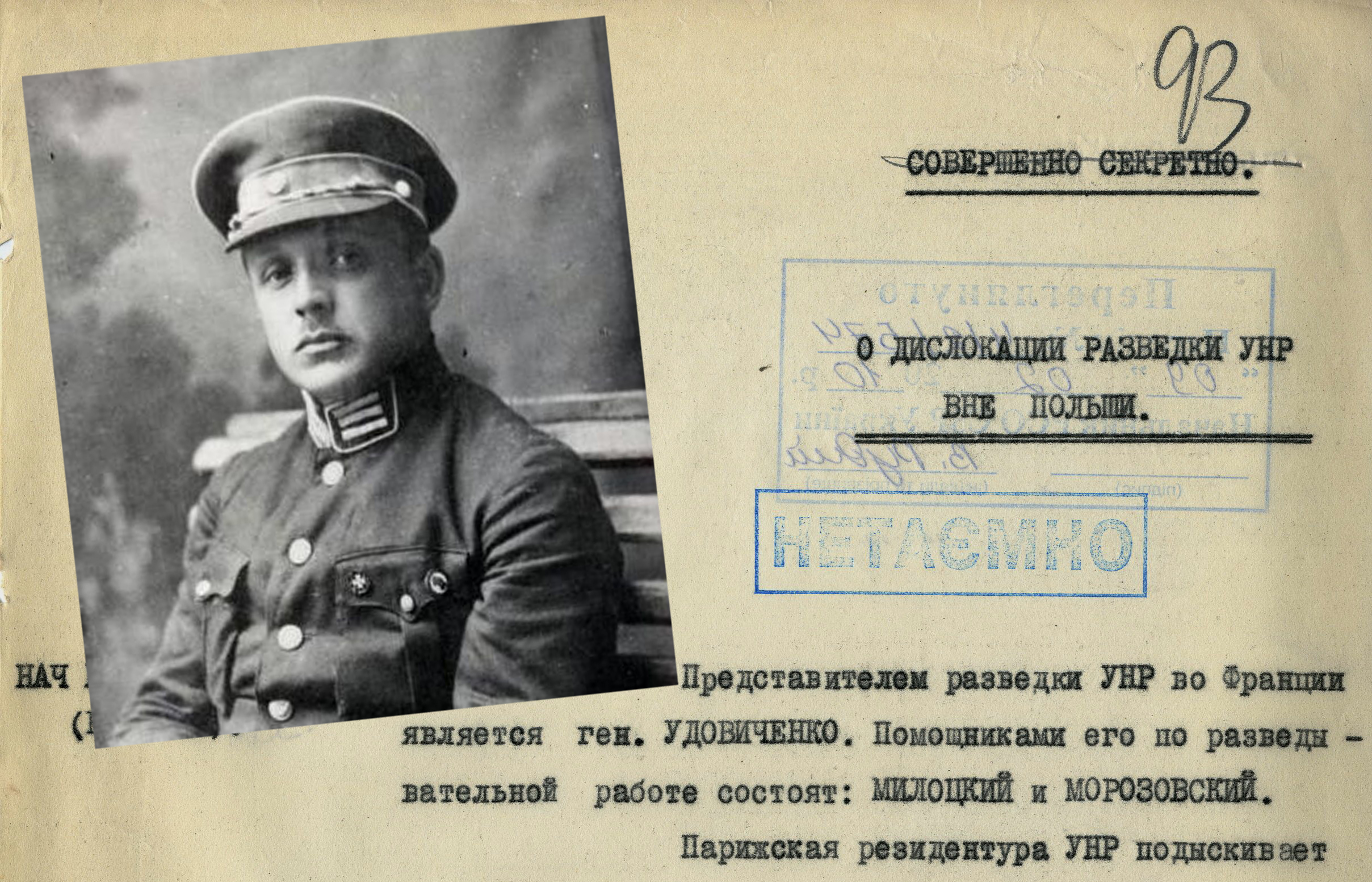 Oleksandr Udovychenko's biography, full of many interesting events, is a more or less organized by historians, although there is still no detailed account. A short biography in the Encyclopedia of the History of Ukraine outlines the main milestones of his life.

Oleksandr Ivanovych Udovychenko was born on February 20, 1887 in Kharkiv. He got a good military education. He began his service in the Russian army. After the declaration of the Ukrainian People's Republic, he joined the Ukrainian Army. He was the Chief of the General Staff, Chief of Staff of the Haydamatsky Kosh of Sloboda Ukraine during the defense of Kyiv from Bolshevik troops under the command of Mikhail Muraviov in January 1918. He later was in different important posts in the Army of the Ukrainian People's Republic. In particular, in March 1920 he formed and headed the Iron Division, which was considered one of the most capable units of the Ukrainian Army. 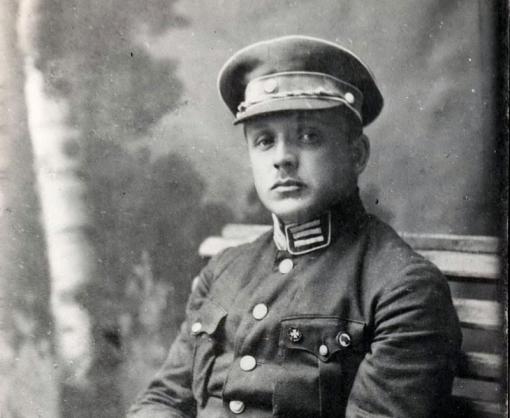 From November 1920 he was in the internment camp in Kalisz (Poland). From 1924 he lived in Paris (France), headed the Society of Former Soldiers of the Army of the Ukrainian People's Republic (since 1927), the European Federation of Ukrainian Military Organizations (since 1937). Was Vice-President of the Ukrainian People's Republic in exile (1954-1960). The author of a number of military-historical works and memoirs. He died in Mentenon (France) on April 19, 1975.

This list, of course, does not include all the sharpness and drama of the events, battles and operations in which O. Udovychenko took part. The position of the Assistant to the Chief of the Intelligence Unit of the Operational Department of the General Staff of the Armed Forces of Hetman Pavlo Skoropadsky's Ukrainian State, has been ignored. Probably, that experience of organizing intelligence work played a certain role in 1918, when already in the conditions of emigration, the Government of the Ukrainian People's Republic was looking for personnel for the secret service of the Ministry of Military Affairs.

Documents of the Soviet state security agencies (OGPU and NKVD) dated from 1920-1930, which are stored in the State Archives of the Foreign Intelligence Service of Ukraine, repeatedly mention Udovychenko's name as “a representative of the UPR Intelligence in France”.

In particular, the “List of Prominent Figures of the Ukrainian Emigration” contains the following information about him: “In 1921 he was associated with the Second Dep. [Department] of the Polish General Staff. Former member of the Ukrainian Party of Social Revolutionaries. He commanded Petliura's special army. In 1925, he applied to enter Ukraine with a group of associates. In 1927, on behalf of the General Staff, General Salsky negotiated with him for his return to Poland, and promised him a senior position in the Polish General Staff and a position of the Chief of the General Staff of the UPR Army. Chairman of the Committee for the Perpetuation of the Memory of Petliura and the Union of Former Soldiers of the UPR Army. Head of the military organization of the Ukrainian People's Republic in France. In case of war with the USSR, he is scheduled to be the Commander-in-Chief of the UPR Army. Today he is one of the most active figures of the Ukrainian People's Republic in France ”(Branch State Archive of the Foreign Intelligence Service of Ukraine. - F.1. - File 12628. - Vol. 6. - Sheet 192).

Next to this description there is a note: “lives in Paris, Ukrainian, the INO OGPU has the address for the case “Starshyna”(”Senior Officer”). Thus, a separate operational case was conducted against him in the central office of the Soviet intelligence in Moscow. These notes show that the Chekists constantly kept Oleksandr Udovychenko in sight, especially during the period when the State Center of the Ukrainian People's Republic in exile was in Paris (1924–1926). 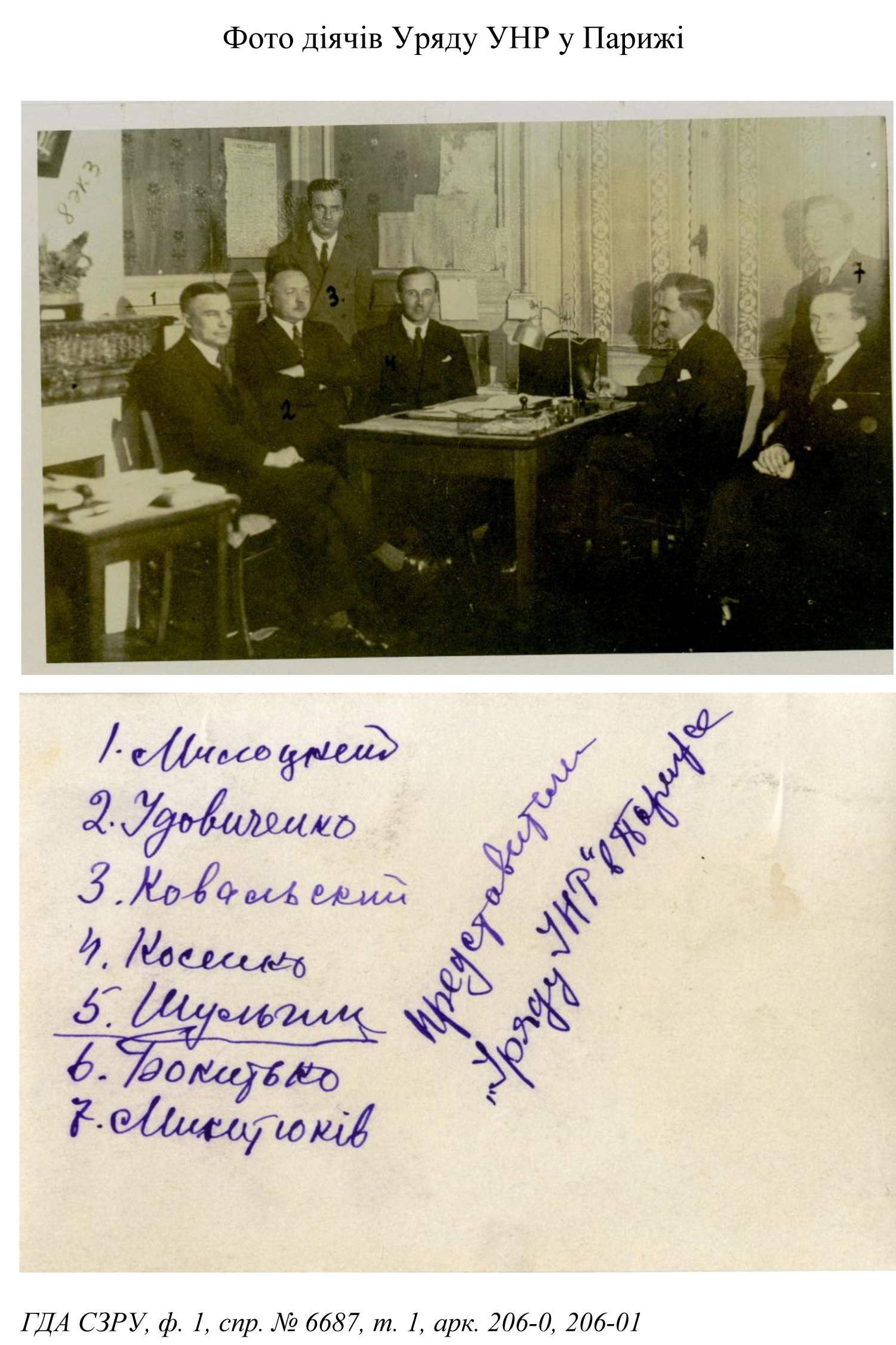 It was in 1924 that the General moved from the camp in Kalisz to France and took a job as a worker in a mine. A year later, after the end of the contract, he remained in that country and became actively involved in public and combatant work. In particular, he began to group his comrades around him and soon headed the Society of Former Soldiers of the UPR Army in France.

During that period, the activities of the Ministry of Military Affairs within the State Centre of the Ukrainian People's Republic intensified. The Ministry was headed by General Volodymyr Salsky, and his Deputies were Generals Marko Bezruchko and Oleksandr Udovychenko. Over time, the work of the UPR government in exile became clearer, and government agencies worked in Warsaw, Paris, and Prague.

Taking into consideration the fact that the Ministry of Military Affairs took care, among other things, of conducting intelligence and counterintelligence activities, O. Udovychenko supervised this direction from the standpoint of France. He was entrusted with all other directions of the Ministry's work, but the Chekists in their documents repeatedly called him “the representative of the UPR Intelligence in France”.

For example, the certificate of the Foreign Department of the GPU of the Ukrainian SSR dated April 28, 1934 “On the Deployment of the UPR Intelligence Outside Poland” reads: “The representative of the UPR intelligence in France is General [Udovychenko]. His assistants in intelligence work are: Milotsky and Morozovsky. The Paris residency of the Ukrainian People's Republic looks for and recruits people to be sent to Ukraine ”( Branch State Archive of the Foreign Intelligence Service of Ukraine. - F.1. - Case 12628. - Vol. 7. - Page 93).

In one of the photos (published for the first time), thanks to the inscription on the back, it is possible to identify the intelligence assistant Milotsky, as well as Kowalski. In particular, in another document Mykola Kovalskyi is characterized by the Chekists as “one of the active members of Petliura's intelligence”. Oleksandr Udovychenko and the Minister of Foreign Affairs of the Government of the Ukrainian People's Republic in exile Oleksandr Shulhyn in the photo are already recognizable (Branch State Archive of the Foreign Intelligence Service of Ukraine. - F.1. – Case. 12617. – V. 16. – P. 109–01).

In another photograph (published for the first time), taken in 1926, the Chekists marked with figures active members of the UPR community in France. Among them are General Mykola Shapoval (1), editor of the Ukrainian Worker magazine, General Mykola Kapustyansky (2), leader of the Military Union of Ukrainian Emigrants in France, General Oleksandr Udovychenko (4), signed as a member of the Presidium of the Military Union and Chairman of the Workers' Union. ”, And other persons named as representatives of the“ Petliura community ”or“ SR community ”( Branch State Archive of the Foreign Intelligence Service of Ukraine. - F.1. - File 12617. - Vol. 16. – P. 109–01).

The exact activities of the sectors “Offensive” (intelligence), “Defense” (counterintelligence) or “Studies” (analytical studies) of the II Section of the General Staff of the Ministry of Military Affairs of the Ukrainian People's Republic in exile planned or implemented from the position of France by Oleksandr Udovychenko, are not mentioned in archival documents. There are only few words that describe the style of work, features of character, the General's belief in emigration.

This is stated in one of the certificates from the case of the Foreign Department of the NKVD of the Ukrainian SSR for 1931-1936, which contains materials about the activities of the UPR in exile. An unnamed source said the following about O. Udovychenko: “Focusing on his own forces and the well-organized and disciplined army, in his work he never supported partisanship, was always an enemy of “otamanshchyna” and stood in opposition to the tactics of raids from Poland, considering internment, as a short break, till a favorable occasion when it would be possible to start operations with the whole army… Therefore, in his camp (Kalish) he maintained combat readiness, did not stop training, developed cultural and educational work, printed military literature, purchased a printing house, trained officers etc.… He is the most energetic, firm and talented among the Petliurist generals… In one of his addresses to the Cossacks he stated: “It so happened that I brought you here, and I will stay with you until I arrange an acceptable life for you or take you out of here”. (Branch State Archive of the Foreign Intelligence Service of Ukraine. - F.1. - Case 12628. - Vol. 1. – P. 121).

There is practically no biographical information about the vicissitudes of his life, let alone secret activity, in the books of memoirs by O. Udovychenko himself - “Ukraine in the War for Statehood” (Winnipeg, 1954) and “The Third Iron Division” (New York, 1971). ). They mention only the course of events of that time.

But these books contain interesting statements about Ukraine and its struggle for freedom and independence, which have not lost their relevance to this day.

”For the second year in a row, the Ukrainian Army had been playing the role of the vanguard of Europe in the fight against the International,” wrote O. Udovychenko in his book “Ukraine in the War for Statehood.” - But it had been performing this role alone, pouring out its lifeblood, in such difficult circumstances, in which rarely any armies were… 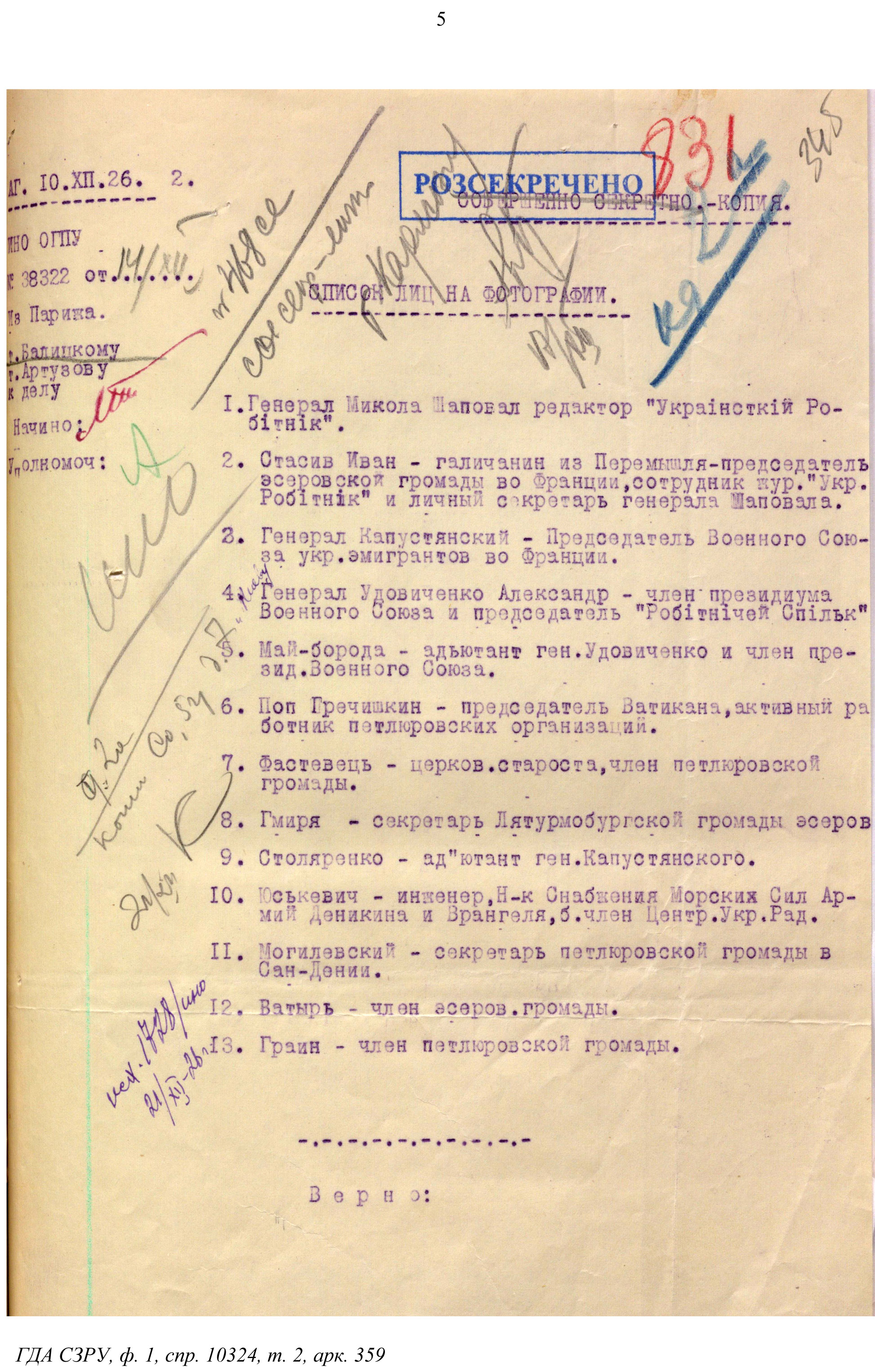 Was it the Ukrainian Army's own fault that it was not successful? 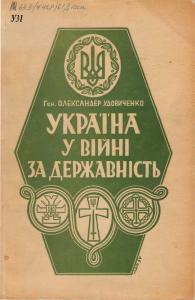 Today, Ukraine has many supporters in all countries of the world who understand its role in the past and future in Eastern Europe, but this understanding of the importance of the Ukrainian issue came after the Ukrainian Army ceased to exist…”.

This was published in 1954. In the year of the loud celebration in the USSR of the 300th anniversary of Ukraine's reunification with Russia, according to the terminology of the time. Even then, Oleksandr Udovychenko was quite critical of the act, did not lose hope for Ukraine's restoration of independence, and remained unchanged in his beliefs about the threats that stood in the way.

”The Entente states made a big mistake in their policy”, he wrote, “in being hostile to Ukraine”. “This mistake was felt in 1920, when the Red Army invaded Poland; it makes itself felt now and will be a threat to the peaceful life of nations in the future. Only by restoring the Independent Ukrainian State can Europe get rid of the constant threat from the Soviet imperialism… ”

On February 20, 2017, Ukraine marked at the state level Oleksandr Udovychenko's 130th birthday. He died 16 years shy of the declaration of Ukraine's independence.