One of the Heroes of Kruty Later Became an Intelligence Officer 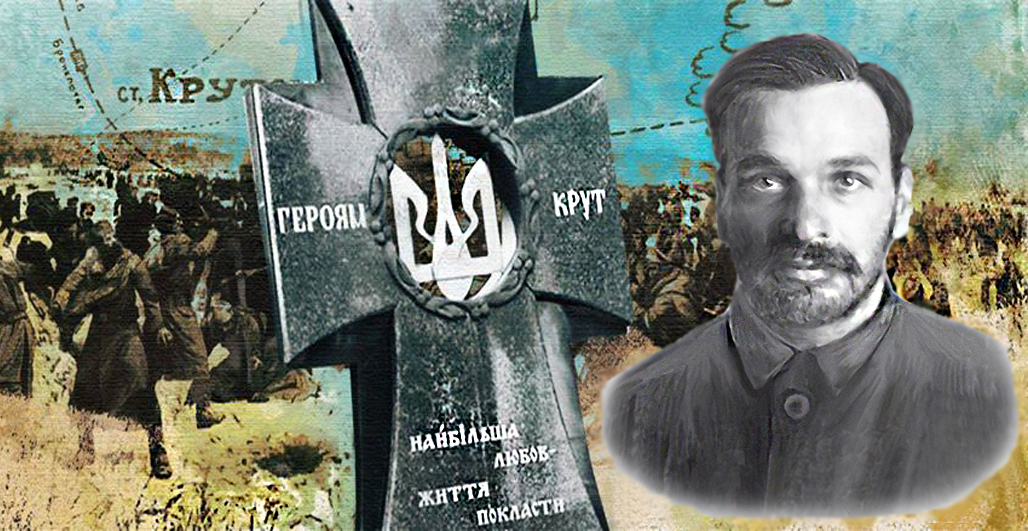 Among those who in January 1918 stood near Kruty on the way of the Bolshevik army, which was marching on Kyiv, a special place is occupied by Semen Mohyla. In that battle he commanded a  chota (company- Transl.) of young men. And after forced emigration, he actively worked in the intelligence department of the Partisan-Insurgent Staff, headed by Khorunzhyi (Leiutenant- Transl.) - General Yurko Tyutyunnyk, and repeatedly was sent to the Ukrainian territory with intelligence tasks.

In 1917 Semen Andriyovych Mohyla worked as a registrar in the town of Rivne, Yelisavetgrad district, Kherson province. As soon as he learnt about the organization of the Ukrainian Central Rada, he immediately went to Kyiv. The desire not to miss the main events in the capital outweighed all his plans. In Kyiv, he entered the 1st Bohdan Khmelnytsky Ukrainian Military School, where he met his friend and cousin Mykhaylo Mykhaylyk, who fully shared his views on building a free, sovereign Ukrainian state.

Semen studied excellently and soon became a bunchuzhnyi (junior officer- Transl.) of his course. And when in late 1917 the School was sent to defend the state border in Chernihiv region against the advancing Bolshevik troops, he was already in command of a youth chota of 30 young men.

S. Mohyla was older than the others. Probably, due to his age and life experience, he was sent at the head of a small detachment with the task of conducting reconnaissance. The young men boarded a steam locomotive and immediately headed towards the Red Army. They did not even have time to develop a detailed plan of action in case of  a sudden meeting with the enemy. But that day youthful courage and bravery were on their side. They even managed to suddenly attack the advanced detachment of the Reds and captured a few prisoners of war.

Real difficulties began later, in the battle near Kruty. Feeling responsible for his subordinates, Semen Mohyla made sure that all the wounded young men of their hundred were taken off the battlefield. He himself managed to survive. He soon found himself in his native Kherson region. There he formed his own partisan group, which actively fought against Soviets.

Soon, military roads brought Semen Mohyla to the Light Artillery Kurin (Regement- Transl.) of the 6th Sich Rifle Division. The Division gained special fame in the battles near Zamostya in August 1920, where a group of Polish and Ukrainian troops managed to detain and bleed Semen Budyonny's First Cavalry Army, which was marching on Warsaw.

Then there were retreats, heavy fighting, losses, forced stay in Polish camps for interned troops. But Semen kept hoping to return to Ukraine. He was soon recruited to work at the Partisan-Insurgent Staff. That Staff was a special body of the State Center of the Ukrainian People's Republic in exile. It was first stationed in Poland in Tarnów, and later moved to Lviv. Its main aim was to prepare an uprising to overthrow Soviet rule in Ukraine and restore a sovereign Ukrainian state. And it was led by Leiutenent - General Yurko Tyutyunnyk.

The “Project for the Organization of Intelligence in Ukraine” was soon prepared, aimed primarily at unifying and improving the organizational structure of the intelligence of the insurgent movement in the Ukrainian lands. It provided for sending intelligence officers and couriers to different regions to prepare the future all-Ukrainian uprising.

At that time Semen Mohyla was more than once sent to the Ukrainian territory with intelligence tasks. In the summer of 1921, he made his way to Kherson region to form an insurgent unit and organize an anti-Soviet uprising. But the Chekists, who defeated the underground, became an obstacle. Semen had to return to Poland.

Soon the Partisan-Insurgent Staff developed an operation to check one of the former captains of the Army of the Ukrainian People's Republic, who had returned from emigration to Soviet territory and lived in Kharkiv. This task was entrusted to Semen Mohyla.

On the first day of the new year 1923, they had to cross the border. But the so-called group of defectors and smugglers from Poland, which included Semen Mohyla and his assistant, was detained by Soviet border guards in the town of Sudylkiv near Izyaslav. Violators of the border were sent to the local branch of the State Political Administration, and soon under heavy guard - to Kyiv.

As it turned out, the Chekists had already won the former UPR captain over to their side and were using him in an operational game with the General Staff of the Ministry of War of the UPR government and the intelligence department of the Polish General Staff. The leadership of the GPU of the USSR was waiting for the arrival of couriers from Poland and planned to monitor all their further actions. But the unforeseen arrest by border guards ruined the whole operation. Now there was no other way but to try to recruit Semen Mohyla. So that he didn't interfere with operation and also acted according to the scenario of security officers.

Day after day, the GPU worked hard with him. But all in vain. They did not succeed. Mohyla did not succumb to persuasion, blackmail, threats or beating. “Useless for recruitment by the GPU”, the investigators wrote in their conclusions after numerous interrogations. He did not give the addresses of other insurgents or underground or anything else. The message addressed to the head of the GPU of the Ukrainian SSR Mantsev, which is in the archival investigation case, states: “The question of using him has been answered negatively by us, given that neither the subjective assessment of Mohyla,  nor the objective information are  in his favor, and there are no guarantees that he will work honestly and sincerely for us”.

This lasted until mid-February 1923. Then he was transported to Kharkiv under a special convoy. Vsevolod Balytskyi, the Deputy Chief of the GPU of the Ukrainian SSR, met with him in person several times, persuading him to come to the side of  Soviet authorities. When this did not work, they tried a different method. They tried to break Semen with the help of relatives. They found his brother, who was a communist and worked in Orenburg as the editor of the Zvezda newspaper. At the dictation of the local Chekists, he wrote a letter to Semen advising him to repent to the Soviet authorities and apologize to them. But this did not work either.

August 24, 1923, the case of Semen Mohyla was transferred to the extraordinary session of the Kharkiv Provincial Court. The decision was expected: to sentence to death. But for some reason they were in no hurry to execute the sentence. He spent more than six months in the death cell of the Kharkiv prison. Apparently they still hoped that he would change his position. He neither changed nor regretted.