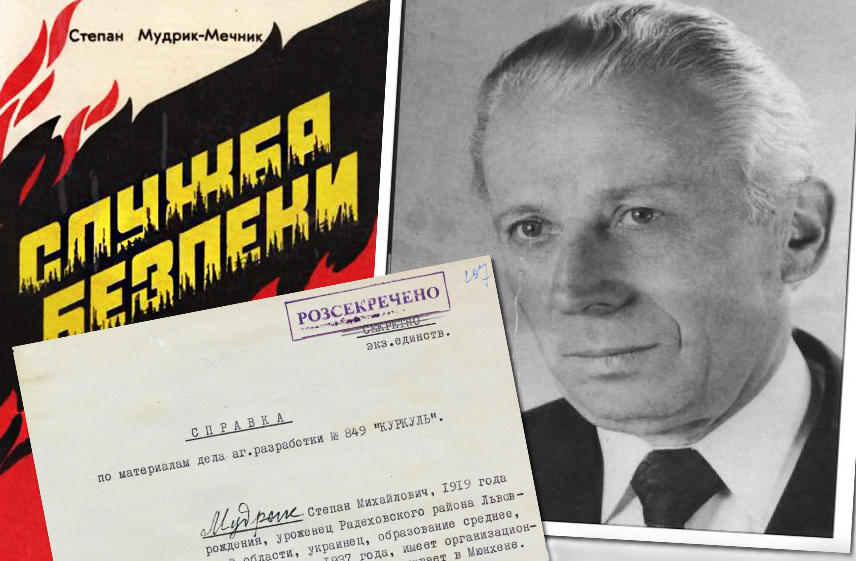 Stepan Mudryk led the OUN (b) intelligence for the longest time - from 1951 until almost the end of the 1980s. At the same time, he went down in history as a consistent fighter for Ukraine's independence. From 1991 he held the position of the Head of the Main Council of the OUN. For 10 years he was Vice President of the World Congress of Free Ukrainians in Europe. For 11 years he headed the Coordination Center of Ukrainian public institutions in Europe. He had written a number of monographs, books, and articles on the history of the national liberation struggle and the activities of the OUN and UPA special services since the 1940s. That period of his activity is mentioned in the declassified document from the archives of the Foreign Intelligence Service of Ukraine.

According to a paper written on the basis of the intelligence case, “Mudryk Stepan Mykhailovych, born in 1919 in Radekhiv district, Lviv region, Ukrainian, secondary education, in the OUN since 1937, has the organizational pseudonym “Mechnyk” “(Swordsman”), lives in Munich”.

The document tells only in fragments about Stepan Mudryk's activity during the Second World War. However, even this information was enough for the KGB Department under the Council of Ministers of the Ukrainian SSR to understand that this OUN figure should be kept under special operational control.

”In 1940, as a member of the OUN on behalf of the organization, illegally crossed the state border near ​​Sokal, fled from the Ukrainian SSR to the so-called Governorate - General, where he joined the activities of the OUN Banderites. Before the war, he repeatedly crossed the border into the Ukrainian SSR and back, ensuring the activities of the liaison office headed by Mykhailo Sydir.

With the beginning of the war, as a member of a combat group of Banderites, he arrived in Zhytomyr and Kyiv regions, on the territory of which he acted as a member of the Security Service.

As a result of intensified persecution by the occupying authorities, in early 1943 he was forced to leave the area of ​​his activity (Zhytomyr region, Kyiv region) and return to Lviv region, where he was included in the “Provid”(leadership- Transl.) of the OUN “Volyn Territory”.

In the summer of 1943, “Mechnyk” went to Eastern Ukraine to organize UPA units. After returning to Radekhiv district, on 21st November 1943, at a reception organized by an Orthodox priest on the occasion of St. Mykhailo's Day, “Mechnyk” was arrested by the Gestapo. 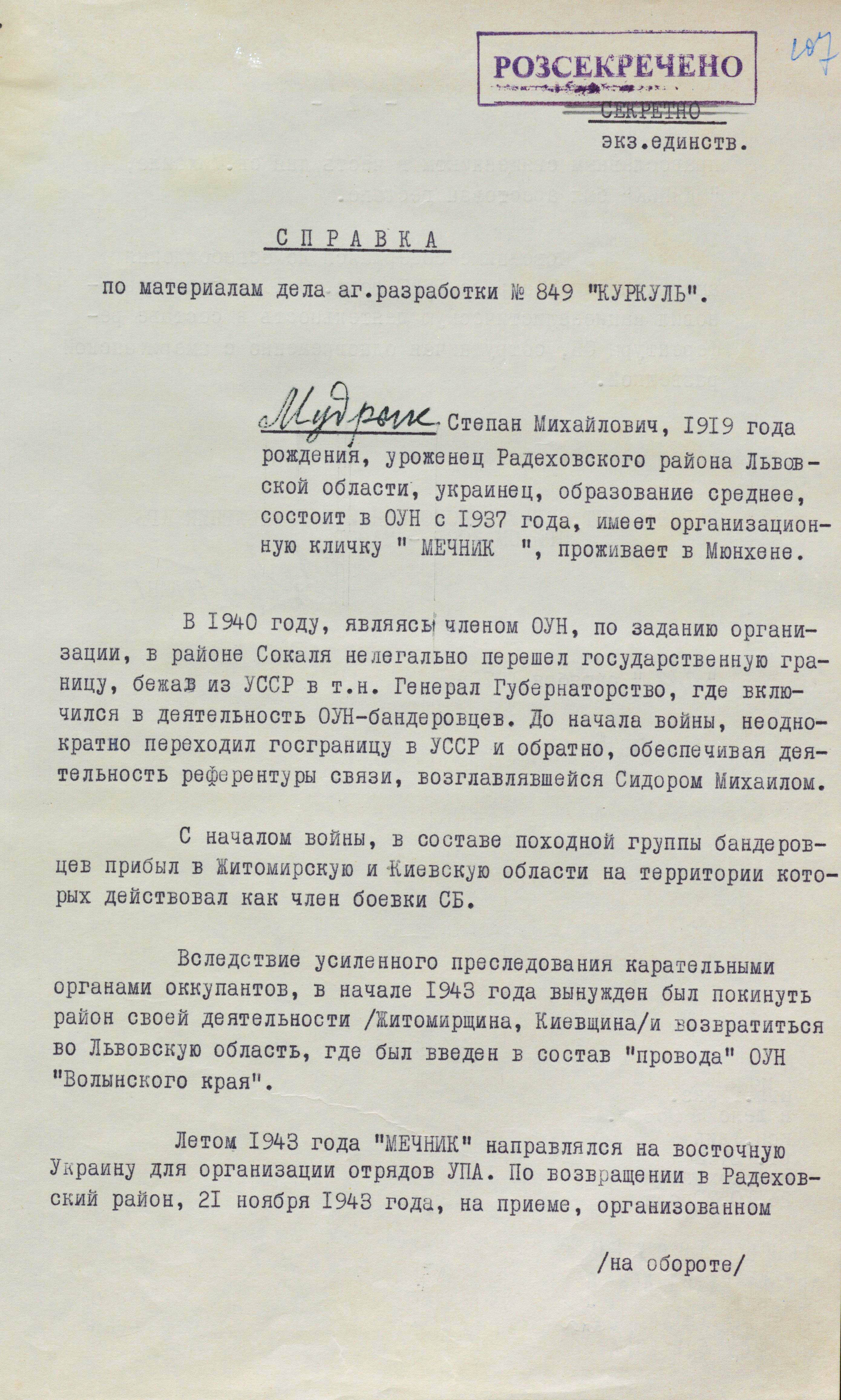 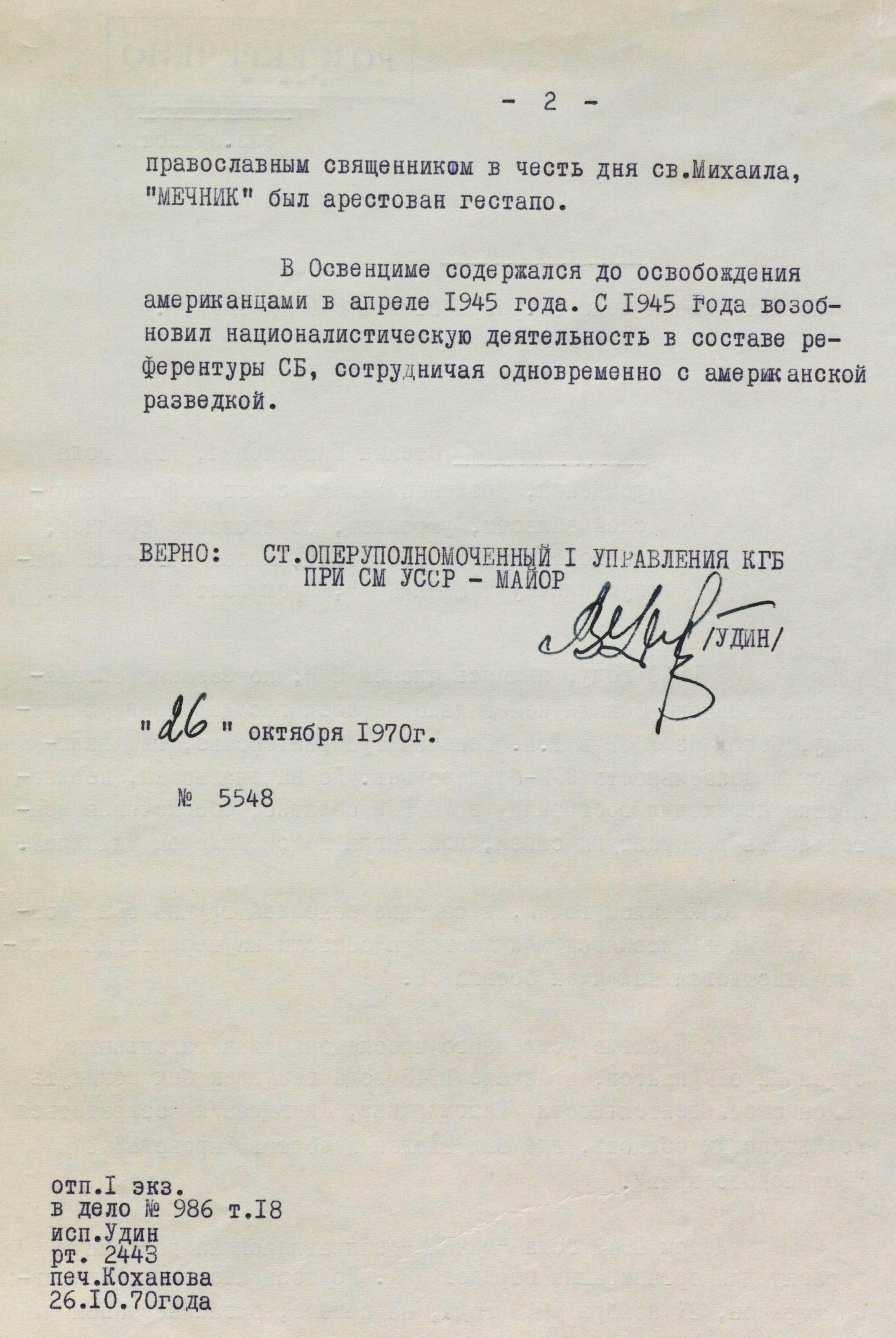 On the one hand, describing Stepan Mudryk's anti-Soviet activities in the above –mentioned document, the KGB uses such concepts as “illegally crossing the state border,” “acting as a member of the SB (Security Service-Transl.) combat group, “participating in the organization of UPA units”, and “cooperating with American intelligence”. For all this at that time he could have been sentenced to death or 25 years in prison camps. On the other hand, no specific examples of this activity are mentioned. Instead, it is noted that “Mechnyk” was repressed by Hitler's punitive authorities.

To fill these gaps, to understand against whom and for what Stepan Mudryk fought, we should refer to other documents, official biography and his personal memories.

He was brought to the ranks of the nationalist underground in his native land (which was then under Poland) by the desire to defend the Ukrainian identity and work for the benefit of his people. On the eve of World War II, he became a communication agent between the OUN regional leader and Stepan Bandera. He saw the war between Nazi Germany and the USSR as a historic chance to overthrow the Stalinist regime and restore Ukraine's state independence and unity.

But the hopes quickly melted away. In response to the proclamation of the Act of Restoration of the Ukrainian State in Lviv on June 30, 1941, the German occupation authorities arrested Stepan Bandera and later other OUN (b) activists. By the beginning of 1942, a number of leading figures of the Ukrainian nationalist movement had been liquidated by the Nazis, and several hundred people, including S. Bandera, had been sent to concentration camps. In 1942–1943, the German occupiers continued to repress both branches of the OUN in Ukraine, as well as in some large cities in Germany, Austria, Poland, and Czechoslovakia. Stepan Mudryk was also repressed. 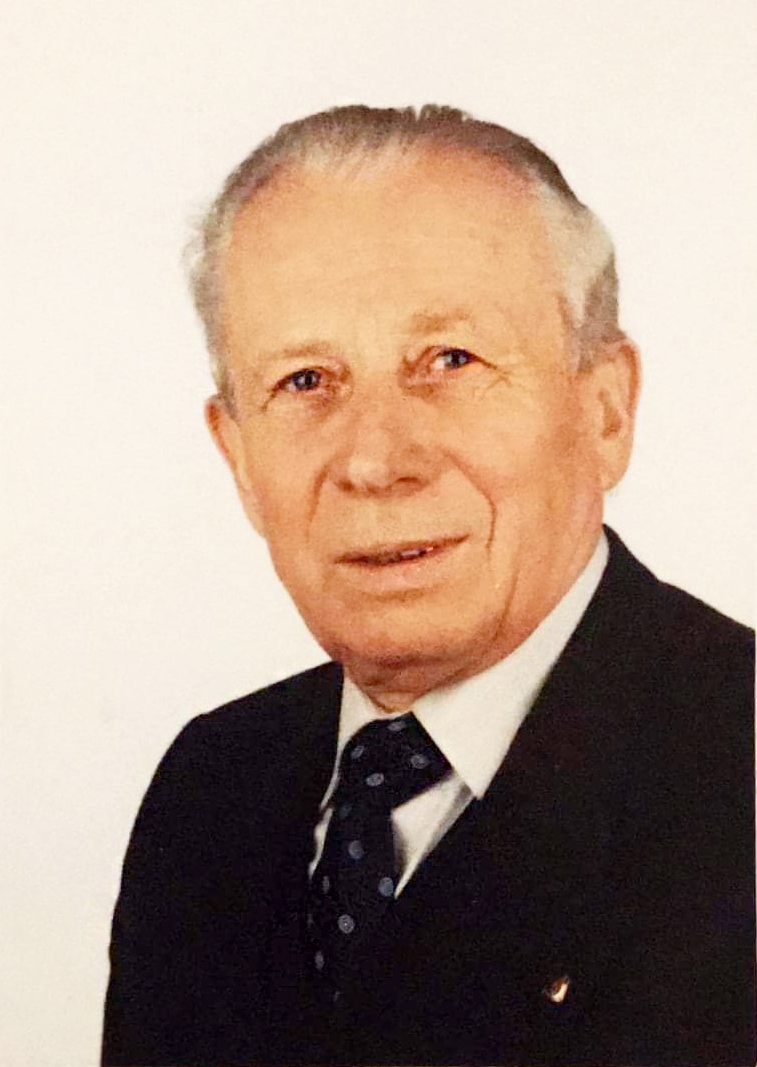 In July 1942, the Gestapo detained him in Kyiv region, but Mudryk escaped from the pre-trial detention facility. Then he joined the creation of the UPA. He soon became the Deputy Commander of the UPA military district “Buh”. In November 1943, he was arrested again by the Gestapo, severely tortured, but did not betray his friends. Nazi court's sentence   to death was later changed to 15 years in a concentration camp by an appellate court, he served his sentences in the Gross- Rosen, Sachsenhausen, Revensburg, and Dora concentration camps.

In his memoirs he wrote: “I belonged to a generation that fought against offlanders during the brutal rule of various occupiers on our land. We did not obey the enemies and did not go to serve the enemy, but created our own force, created our Ukrainian content. We created and developed our Ukrainian Liberation Movement - the OUN and the UPA, which fought against all the occupiers of Ukraine. During the Second World War, we fought on two fronts - against the Nazi and the Red Moscow occupiers.

In April 1945, Stepan Mudryk was liberated by American troops. Having re-established his lost ties with the OUN, he organized the public life of Ukrainians in Germany. He was a member of the OUN Foreign Units Command and for many years headed the OUN (b) territorial leadership in Germany. He graduated from the Faculty of Law of the Ukrainian Free University, taught, was a Professor at that institution.

However, the most important task of his life was the organization of intelligence activities. Stepan Mudryk was the Chief of the Intelligence of the OUN Foreign Units for longer than anybody else. Back in the spring of 1951, Stepan Bandera at a secret meeting in the presence of the head of the OUN Security Service Ivan Kashuba and Stepan Lenkavskyi (future Head of the OUN leadership) set the task to separate Intelligence from the Security Service and to conduct intelligence in compliance with the strictest conspiracy requirements, with involving faithful and verified persons who had a talent for such work. S. Bandera appointed S. Mudryk, (who was later officially listed as the Deputy Head of the OUN Security Service) as responsible for organizing this activity. 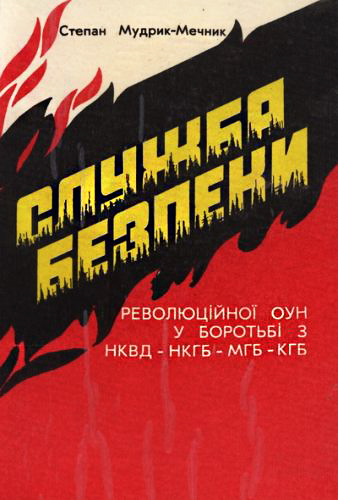 He was one of those who, a few weeks before KGB agent Bohdan Stashynskyi's assassination attempt on Stepan Bandera, informed that the Soviet secret services were up to something, and suggested that the OUN leader's security measures be strengthened. But he was not heard. However, the experience gained by S. Mudryk in his work in the Security Service and, in particular, in Intelligence, was so valuable that the new OUN leadership did not even consider his possible replacement. At that time, nobody could cope with his duties better.

Stepan Mudryk also selected like-minded people to work in intelligence. Describing the psychological characteristics of his staff in the book “Security Service of the Revolutionary OUN in the Fight Against the NKVD-NKGB-MGB-KGB”, he pointed out: “Among them were people with experience, who had many years of underground work, imprisonment with top sentences of enemy courts. Those were modest people with great faith in the Ukrainian truth and the Ukrainian state, who lived at that time in very severe material deprivation”.

The intelligence activities of Ukrainian foreign centers did not cease until the collapse of the USSR. In different periods, they used a tourist channel, channels of cultural, scientific, youth exchange, private trips, participation in international forums to gather information about the situation in Ukraine. Back in the summer of 1959, S. Bandera instructed the leaders of the OUN Security Service, I. Kashuba and S. Mudryk, to collect intelligence at the VII World Festival of Youth and Students in Vienna and to distribute Ukrainian publications among its participants. The Kashuba-Mudryk group also worked at the XVII Olympic Games in 1960 in Rome and at other international events in the decades that followed.

At the time of the above-cited document being written (October 1970), Stepan Mudryk felt the close attention of the KGB. That is why he wrote in his memoirs: “The KGB attack on me is intensifying. I have been informed by several sources that I am of great interest for the staff of the Soviet embassy… In January 1969, I resigned from some responsibilities that belonged to the secret sector… But the KGB did not leave me alone. Anonymous letters, phone calls, from time to time I claim surveillance… “.

No wonder, because despite his illness, he did not stop his active work in Ukrainian emigrant circles. Thus, on his initiative, a campaign was launched to send aid to Ukrainian political prisoners of 1960s: Yevhen Sverstyuk, Yuriy Badzio, and others. And during Secretary General of the CPSU Central Committee Leonid Brezhnev's visit to Bonn, Stepan Mudryk was one of the organizers of a large protest demonstration. He made a lot of efforts to build inter-political emigration Ukrainian forums, held high positions in them. 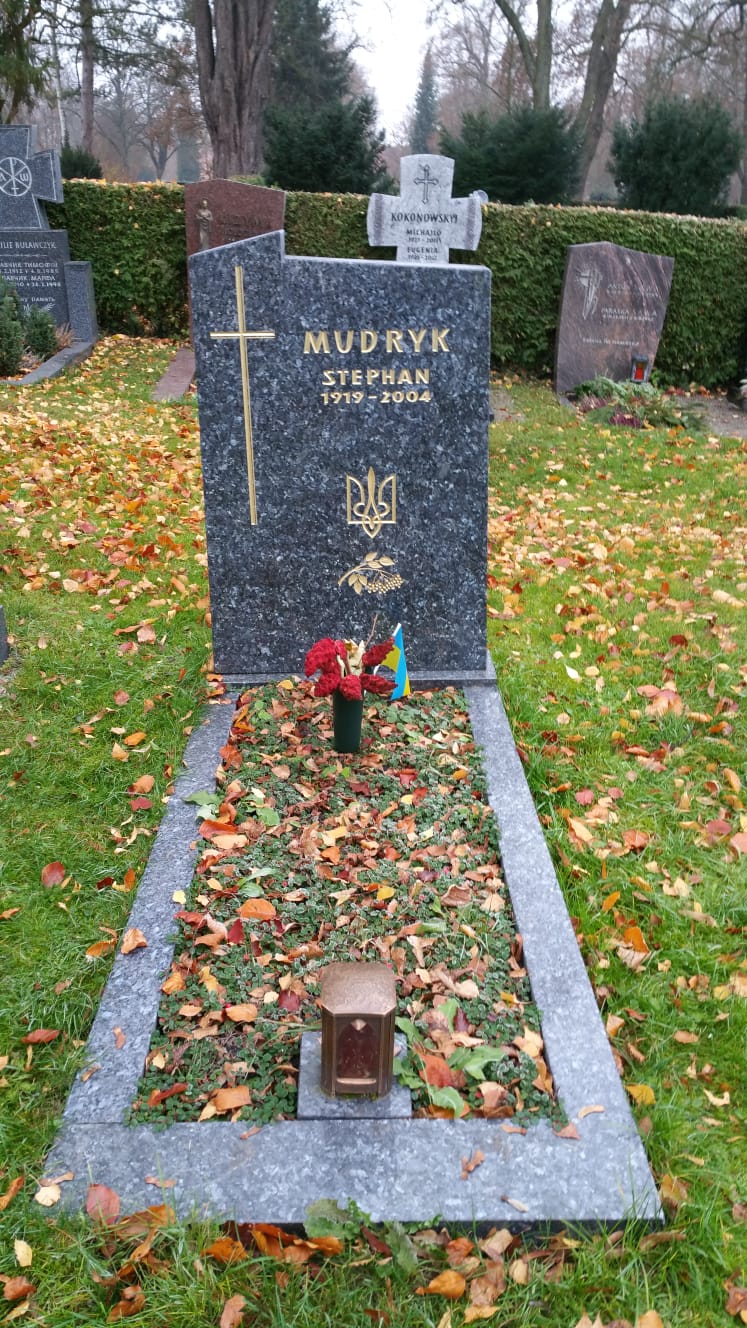 In his book “In the Struggle Against Moscow's Agents”, published in Munich in 1980, Stepan Mudryk expressed, in fact, his life credo: “Therefore, our struggle with the Muscovites is being waged for our nation-state, and this requires the political and state development of our entire nation, its great resistance to hostile ventures and awareness of the constant danger. After all, the enemy, when he cannot deceive or mislead those who are struggling, destroys them physically. Ordinary citizens cannot fight the hostile bodies of terror and provocation. To do this, professionals  should be trained who could see through the enemy's plans and unmask them. Because we are dealing with an artful and backstabbing enemy… “.

Written over 40 years ago, these words are relevant in the current situation. Equally valuable is Stepan Mudryk's long professional experience in the confrontation with the KGB of the USSR — one of the most powerful intelligence services in the world at the time and its arsenal of special operations, intelligence penetration, active measures, information and propaganda actions, methods of psychological and physical destruction which are now actively used by the RF special services against Ukraine.

(Stepan Mudryk's photo from the home archive of his great niece Natalia Tkachiv). 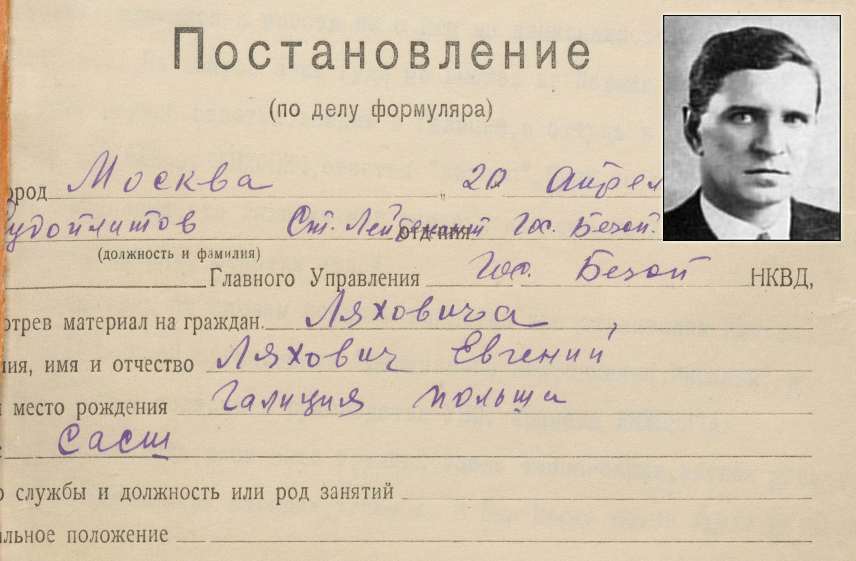 A year before the KGB Senior Lieutenant Pavlo Sudoplatov assassinated the leader of the OUN Yevhen Konovalets in Rotterdam, he opened a case against Eugene Lachowitch, about whom one of the documents states: “He is considered one of the best diplomats and intelligence officers among nationalists”. Declassified documents from the Archives of the Foreign Intelligence Service of Ukraine make it possible to understand why in the 1930s the GPU was so interested in Eugene Lachowitch, how he managed to draw the British government’s attention to the Ukrainian question and why in 1959 the decision to cultivate him was made by the KGB board under the Council of Ministers of the USSR.