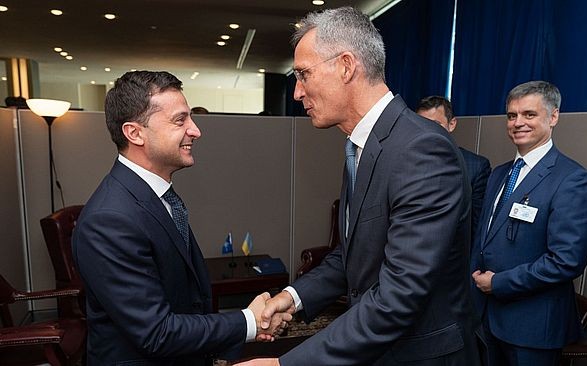 The proposal was discussed in detail at the recent 56th Munich Security Conference at the level of leaders of intelligence services of NATO member states and Ukraine, as well as during the Foreign Intelligence of Ukraine's bilateral and multilateral meetings with partners.

An important aspect of the NATO Enhanced Opportunity Program is engaging partners in an expanded intelligence dialogue, says Chairman of the Foreign Intelligence Service of Ukraine Valerii Yevdokymov, who took part in the Munich Conference. “Further advancement in relations with NATO requires a new level of interaction, including in intelligence sharing. The main directions of Ukraine's cooperation with NATO under the Enhanced Opportunity Program may be active measures to counteract the aggressor, in particular in the Black Sea region, partnership in fighting international terrorism and organized crime, joint counteracting cyber threats. But the priority component of security cooperation at the bilateral (Ukraine, USA) and regional (EU, NATO, OSCE) levels should be a professional intelligence sharing”, — said Valerii Yevdokymov.

The Foreign Intelligence Service of Ukraine is an active participant in the formation of the Annual National Program (ANP) under the auspices of the NATO-Ukraine Commission. It is a systematic document describing the reforms in the respective spheres, determining their strategic goal, aims, priorities and measures needed for the effective systematic implementation of the country's strategic course for full membership in NATO.

Over the last three years alone, within the framework of the implementation of the ANP, the Foreign Intelligence Service of Ukraine has achieved significant results:

— The draft Law of Ukraine “On Intelligence” was developed, which aims to form the intelligence community of Ukraine and significantly strengthen the civilian and democratic control over the activity of intelligence agencies, taking into account their specificity;

— The capabilities of the SZRU analytical centre have been built up, its integration with the Main State Analytical Centre has been ensured, which improves the effectiveness of crisis response to threats to national security;

— Interaction has been intensified and exchange of information has been increased significantly between Ukraine and NATO member states on counteracting hybrid threats.

The Foreign Intelligence Service of Ukraine is currently working on projects under the NATO One Partner — One Plan (OPOP) initiative, implementation of which will enable significant progress in many areas of the development of the SZRU.