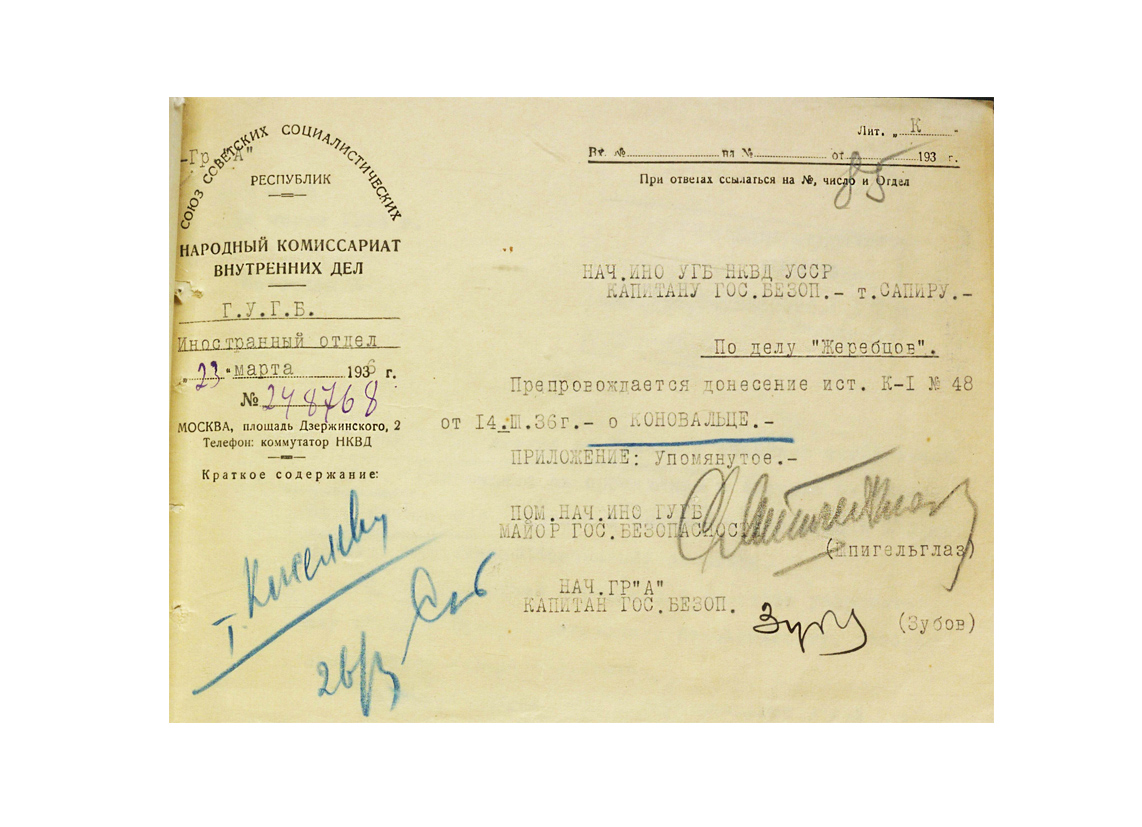 Yevhen Konovalets' activity and the growing popularity of his ideas among Ukrainian young people greatly concerned the Bolshevik leadership in Moscow. During the Holodomor of 1932–1933 and in the years since, the OUN was even more insistently debunking the crimes of the Stalin regime, and increased public pressure on the Soviet government, demanding that the League of Nations considered the situation in Ukraine. This greatly alarmed the Soviets.

Tasks of the 5th Department (Foreign Intelligence) of the NKVD of the USSR:

- detection of anti-Soviet activities of foreign states and their special services, as well as anti-Soviet emigrant organizations;

- exposing espionage activities in the USSR;

- monitoring foreigners' entry into and exit from the USSR.

After receiving directives on the need to strengthen intelligence and counterintelligence activities aimed at foreign Ukrainian nationalist centers, the Foreign Department of the NKVD of the USSR immediately developed and sent relevant proposals to Moscow. Among other things, there was a clause on planting well-tried and reliable agents in Yevhen Konovalets' environment, who could learn about the plans of the main leader of the OUN and thus influence the course of events.

In those years, Soviet intelligence had its agents in the OUN and knew that Konovalets was making great efforts to establish ties with the nationalist underground in the Soviet Ukraine, in the existence of which he strongly believed. So they played this card. The operation was called “STAVKA”.

In its arsenal, the DPU of the USSR had an agent Vasyl Lebid. A native of Galicia, he served in the units of the Ukrainian Sich Riflemen of the Austro-Hungarian Army during the First World War. Then he was taken prisoner of war by the Russians and from 1915 to 1917 he was in a POW camp near Tsaritsyn, where at the same time Yevgen Konovalets, Roman Sushko and other Galicians were held captive. Later, during the years of the national liberation movement in Ukraine, they fought together against units of the Red Army and other enemies of the UPR.

After the Ukrainian Army found itself on the territory of Poland and stopped open resistance, Ye. Konovalets sent loyal comrades to Ukraine to organize underground cells and the insurgent movement. One of those was V. Lebid. But he failed to develop underground work. He immediately fell into the hands of the Ukrainian Chekists and in exchange for his own and his family's life and peace he agreed to cooperate.

Acting on the Chekists' instructions, V. Lebid first tried to enter the country illegally through Finland, but failed. Finnish border guards returned him. Soon, in August 1933, he arrived in Belgium on a Soviet cargo ship. There he found a member of the OUN Provid (council leadership) Dmytro Andriyevskyi. Later, Yevhen Konovalets came to Brussels.

According to the legend, V. Lebid, who at that time had the surname Khomyak, convincingly told about the underground work he had established in Ukraine. He allegedly worked as a financier in a construction trust in Kharkiv in the early 1930s, and when the arrests began, he disappeared from the city and hid for a while, then, with false documents, through his acquaintances found a job on a Soviet ship on which he arrived in Belgium.

Ye. Konovalets insisted that V. Lebid return to Ukraine to build an underground network. Finally, in October 1934, the agent arrived in the USSR and reported to the DPU that he had fulfilled the task of gaining the trust of the OUN leadership.

At the next stage, it was decided with the help of Lebid-Khomyak to plant in the OUN a senior officer of the NKVD. Pavlo Sudoplatov, who was born in Melitopol, lived in Ukraine until 1933, worked in Kharkiv at the DPU of the Ukrainian SSR and spoke Ukrainian, was chosen to this role. In letters to Ye. Konovalets, V. Lebid wrote that he had recruited a former Komsomol member with whom he had been acquainted for a long time, who had brought him up in a nationalist spirit, and who, he believed, would be a useful fighter for the idea of ​​an independent Ukraine. In the letters, he proposed to send the young man abroad for special training. At the same time, for almost a year, P. Sudoplatov was intensively trained for this trip and was taught German.

In June 1935, V. Lebid and P. Sudoplatov, who took the name Pavlus Valyukh, arrived in Finland, where shortly before that the NKVD had legalized another agent in the OUN.

This was Kindrat Poluvedko, born in 1895, a Ukrainian, a native of Vinnytsia, who from 1918 to 1920 was a Ukrainian Socialist Revolutionary and a member of the UPR, but later withdrew from active political activity, getting a job in the People's Comissariat of Education of Ukraine. In 1933 he was arrested as a former SR. During the investigation, he agreed to cooperate. A legend was soon developed for him, according to which he was a member of one of the nationalist groups liquidated by the DPU, was sentenced, but managed to escape from Solovki to Finland.

For some time, representatives of the local OUN branch had been carefully checking K. Poluvedko. He was playing the best he could the role of a Ukrainian patriot who had suffered from Soviet rule, was often published in the nationalist press, in particular, in the Parisian newspaper Ukrainske Slovo, and took an active part in public life. He was soon noticed by representatives of the OUN leadership, contacted, and the Ukrainian community in Finland elected him its leader. This created the necessary conditions for him to gather information about the activities of the OUN.

Having lived at K. Poluvedko's for several months, P. Sudoplatov soon managed to meet Ye. Konovalets and establish a trusting relationship with him. Vasyl Lebid introduced him as his nephew, a representative of the new generation of Ukrainian youth, disappointed with the Soviet reality and ready to struggle for restoration of Ukraine's independence. Gradually, relations between Sudoplatov and the head of the OUN leadership became friendly. Together, they traveled to Paris and Vienna, where they met with Ukrainian emigration leaders to discuss plans for a possible nationalist underground in Ukraine in case of war.

After the Kremlin had got acquainted with the information obtained about the activities and plans of the OUN, they decided to liquidate the OUN leader. This idea arose directly from Stalin, who during the discussion of possible ways to conduct this operation pointed out that its main goal was to liquidate the leader of the OUN and make his environment destroy each other in the struggle for leadership in the organization.

P. Sudoplatov, without any hesitation and remorse, began to prepare for this terrorist act. In May 1938, as a radio operator on a Soviet ship, he arrived abroad from the USSR and in a telephone conversation with Ye. Konovalets arranged a meeting in Rotterdam. During the meeting, he presented the OUN leader with a box of sweets containing an explosive device. The explosion occurred half an hour after P. Sudoplatov had left the restaurant.

The murder of Ye. Konovalets had a wide resonance in Ukrainian nationalist circles. As expected in the USSR, it intensified internal confrontation among OUN members and led to a split. Nevertheless, the assassination of Ye. Konovalets did not put an end to the existence of the Organization.